I cannot tell you all how incredibly excited I am to be part of BookNerd Tours amazing KINSLAYER Blog Tour. I had been wanting to read Jay Kristoff's debut STORMDANCER long before it's debut. For many reasons that didn't happen until Jean and Amber announced they were hosting this tour. Originally I was meant to review the sequel KINSLAYER, releasing next week. Unfortunately that wasn't to be,but I am thrilled that I am able to review the first book for you- and hopefully spark new interest in what proved (to me) to be leaps and bounds above the hype. A truly phenomenal story made of legends and certain to become own on its own. So without further delay, we proudly present Jay Kristoff and The LOTUS WAR...
**A quick WARNING! The KINSLAYER synopsis will have MAJOR SPOILERS. I don't recommend peeking if you have not read the first book.
Don't forget to enter the GIVEAWAY! I want to say thank you to Jean Vallesteros for being AWESOME! And a special thank you to Candace Robinson for saving me by granting me her copy of STORMDANCER. 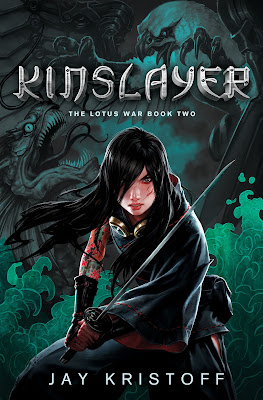 A SHATTERED EMPIRE
The mad Shōgun Yoritomo has been assassinated by the Stormdancer Yukiko, and the threat of civil war looms over the Shima Imperium. The Lotus Guild conspires to renew the nation’s broken dynasty and crush the growing rebellion simultaneously – by endorsing a new Shōgun who desires nothing more than to see Yukiko dead.A DARK LEGACY
Yukiko and the mighty thunder tiger Buruu have been cast in the role of heroes by the Kagé rebellion. But Yukiko herself is blinded by rage over her father’s death, and her ability to hear the thoughts of beasts is swelling beyond her power to control. Along with Buruu, Yukiko’s anchor is Kin, the rebel Guildsman who helped her escape from Yoritomo’s clutches. But Kin has his own secrets, and is haunted by visions of a future he’d rather die than see realized.A GATHERING STORM
Kagé assassins lurk within the Shōgun’s palace, plotting to end the new dynasty before it begins. A waif from Kigen’s gutters begins a friendship that could undo the entire empire. A new enemy gathers its strength, readying to push the fracturing Shima imperium into a war it cannot hope to survive. And across raging oceans, amongst islands of black glass, Yukiko and Buruu will face foes no katana or talon can defeat.

The ghosts of a blood-stained past. 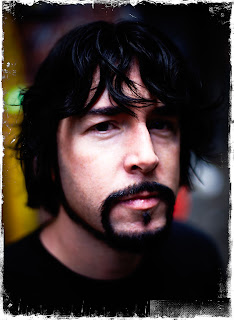 Jay Kristoff is a Perth-born, Melbourne-based author. His first trilogy, THE LOTUS WAR, was purchased in the three-way auction by US publishing houses in 2011. He is as surprised about it as you are. The first installment, STORMDANCER, is set to be published in September 2012 in the US, UK and Australia.

Jay is 6’7, has approximately 13870 days to live and does not believe in happy endings.

One word: BRILLIANT. Kristoff has a savage eloquence and serious street smarts. He has more than a way with words. He paints them with perfect imagery. Perfect timing. Perfect execution. Leaving you bleeding and begging for more.
STORMDANCER is a wonderful mind blowing blend of Japanese warriors, mythology, creative histrionics, and Steampunk fantasy. An intricate world of complicated politics and religion. Built on lies, deceit, and false promises. Our heroine Yukiko's home of Kigen, an unkind and brutal place. Choked by the addictive lotus weed and powered by chi. Marshalled by humans wearing clockwork skins as the Army of a corrupt and cruel young leader, the Shogun Yoritomo, raised on an ancient and blinded belief system. A dying world devoid of any true beauty and happiness.  With only one true hope. A myth. A legend come to life.
STORMDANCER is brimming with fascinating and frightening creatures. The evil oni reminded me of the monsters from one of my favorite graphic novels, Claymore. *shudders* Seemingly unstoppable beings straight from the bowels of hell. But there were those much more fantastical and amazing. Namely the arashitora. The Thunder Tiger. A Griffin. A fierce and beast believed to be extinct. (A favorite of mine in mythical creatures). A beautiful and terrifying blend of the perfect predator. And this one was beyond my imagination. It was truly magnificent. And then there is a girl... Young, beautiful, with a gift she must keep hidden to stay alive. Born into the Fox clan, Yukiko has the power to communicate with animals. Seen by the Guild (the priests) as too powerful and dangerous, anyone with such a gift is condemned. It's a heavy secret for a child to bear, but nothing compared to what she must face on her father's commanded quest. Yukiko might be my favorite heroine. She is a smart self-thinking, sensitive soul. Brave, determined, and just as fierce as the Thunder Tiger.
You would think a story like this would focus mainly on the action. And there is plenty of that. But that's not all. Seriously, this story was so much more than I expected. I was thrilled to fall into another fantasy. To discovery a new world. To be fascinated by strange and amazing characters. I did not expect them to touch my heart so. To feel their fear and desperation. The depths of their love and convictions. What made this a great book for YA readers was the level of emotion it evoked. The relationships throughout STORMDANCER are strained. Tinged with doubt, mistrust, and fear. Peppered with lies, secrets, and the complications of division of class and clan, and the constant threat of an uprising among rebels. Friendships are rare and alliances uneasy. Getting into the heads of these characters and all they've been through. The tugging of the heartstrings and gutting of hopes and dreams.  There were moments of devastation. Heartache. Unbelievable pain. Undying love and loyalty. Restless determination. And elation.
I won't name the other key characters and Kristoff's creations. I want you to meet them as I did. Some from Yukiko's childhood. Some thrown together by fate and circumstance. Some to be feared. Others loved and revered. All so well written they felt absolutely real. Their dialogue as intense and riveting as the plotline. Keeping my eyes glued to the page and gripping the book's edges with anticipation.
I've read some great fantasy this year but nothing has compared to the majesty of Krisoff. He doesn't just write. He commands the page.  Controlling and manipulating his characters wills and our attention. Like one of the clan and Empire's tattoos, each stroke filled with firm intent and deep meaning. Least not the parallel of a world being destroyed by the hands of it's own people. The harsh realities of humanity. Power. Fear. Hatred and neglect. Excess and abuse. Despite it's deadly and brutal lessons, STORMDANCER is wildly entertaining and completely mesmerizing.


I can't express the joy and pain I felt at the perfect end of this phenomenal tale without giving too much away. But know that with all that Yukiko must endure (and you as her witness), it is all well worth the ride. I am eager to continue her journey. To see where, how far, and how high she will go.

a Rafflecopter giveaway
Posted by kvsgrimes at 7:00 AM