I am SO FREAKING beside myself, bursting with excitement and joy, that we get to bring to you ANTIGODDESS by Kendare Blake. Being part of this tour is a HUGE honor, and I can't thank Kendare, TOR Publishing, and our girls Jean and Amber at BookNerd Tours, enough for this amazing opportunity. Thank you! Thank you!!!
Today we have Kendare's Top Ten Guys... from HER books. I will tell you to read with caution, she does have a couple of SPOILERS for both of her series in there. Nothing too devastating or life changing, but still, BE AWARE if you haven't read either, or aren't up to date on your Greek mythology. ;)
Be sure to check out my review. I gush a bit over Kendare's awesomeness. I TOTALLY LOOOOVED THIS BOOK!!! I promise NO spoilers there. I implore you to add ANTIGODDESS to your Goodreads list. And of course you'll also want to enter the BookNerd Tours GIVEAWAY!


Thanks for stopping by Tsk, Tsk, What to Read. Happy reading and good luck! ~Shell


Top Ten List - Your favorite guy characters from your books, including random facts about them.
1. Tybalt, the spirit sniffing cat from Anna. Because he’s my real cat.
2. Cas, because he’d kick my ass if I didn’t say so.
3. Odysseus. He’s a cocky adventurer. What’s not to like?
4. Hermes. Oh the fun we would have, if ever we hung out.
5. Thomas Sabin. Sure, he’d read my mind a lot, but he drives that great Ford Tempo.
6. Henry, from Antigoddess. This has a lot to do with who he used to be. Spoiler alert, Hector of Troy. What a hunk.
7. the ghost of the police officer melded with the railway worker. Because he was fun to write.
8. Morfran, because he calls ring bologna “sausage”.
9. Ares. Oh shoot, he’s not in a book that’s out yet. Cat’s out of the bag now.


10. The hitchhiker. I don’t know why. I just have a fondness for him. Out of all the dead people, I like him best. 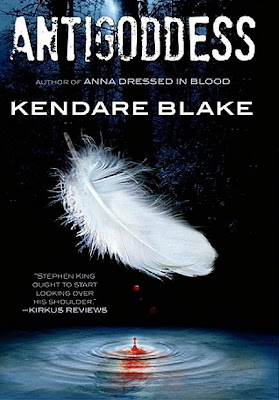 The Goddess War begins in Antigoddess, the first installment of the new series by acclaimed author of Anna Dressed in Blood, Kendare Blake.

Or so Athena thought. But then the feathers started sprouting beneath her skin, invading her lungs like a strange cancer, and Hermes showed up with a fever eating away his flesh. So much for living a quiet eternity in perpetual health.

Desperately seeking the cause of their slow, miserable deaths, Athena and Hermes travel the world, gathering allies and discovering enemies both new and old. Their search leads them to Cassandra—an ordinary girl who was once an extraordinary prophetess, protected and loved by a god.

These days, Cassandra doesn’t involve herself in the business of gods—in fact, she doesn’t even know they exist. But she could be the key in a war that is only just beginning.

Because Hera, the queen of the gods, has aligned herself with other of the ancient Olympians, who are killing off rivals in an attempt to prolong their own lives. But these anti-gods have become corrupted in their desperation to survive, horrific caricatures of their former glory. Athena will need every advantage she can get, because immortals don’t just flicker out.

Every one of them dies in their own way. Some choke on feathers. Others become monsters. All of them rage against their last breath.

The Goddess War is about to begin. 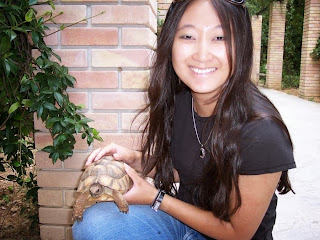 Kendare Blake is an import from South Korea who was raised in the United States by caucasian parents. You know, that old chestnut. She received a Bachelor’s degree in Business from Ithaca College and a Master’s degree in Writing from Middlesex University in London. She brakes for animals, the largest of which was a deer, which sadly didn’t make it, and the smallest of which was a mouse, which did, but it took forever. Amongst her likes are Greek Mythology, rare red meat and veganism. She also enjoys girls who can think with the boys like Ayn Rand, and boys who scare the morality into people, like Bret Easton Ellis.

Holy GODS and GODDESSES!!! I am absolutely REELING from the brilliance that Kendare has cemented into these pages. Phenomenal does not even begin to cover how INCREDIBLE this story was. I'll tell you right now. Get your big girl pants on. It's gonna be a bumpy ride.
I was so anxious (gross understatement) to read ANTIGODDESS. It seemed like an eternity until I had the chance to settle in and let myself be immersed into what I thought would be a fun, exciting twist to Greek mythology. I couldn't wait to see Kendare's take and to meet Cassandra. And then I sat ready to embrace whatever Kendare had planned for me and this intriguing cast of characters. Within a few pages I knew this story was different from anything I'd read before. I gave myself over completely to this beautiful and desperate tale. Left at Kendare's mercy, fingers gripping the pages eager to learn where it all began and what was in store.
The anxiety and anticipation- and surrender was more than worth the payoff. Once I began, I was completely lost in Cassandra's world. I was taken on a most amazing and wild ride. I was dazzled, amused, bewildered, SHOCKED and stunned, driven to tears and shouts of despair and cheers. I suffered heartache and more anxiety. I witnessed brilliantly and fully created characters who leapt off the page, capturing my heart and instilling fear. I watched mesmerized as a young girl was forced to realize her reality and her destiny. I fell in love. Had my heart ripped to pieces. And fought to keep the faith that good would win the the end.
Everything about this story was simply amazing. Each character drew me in. Made me want to understand and empathize with their plight. The connections between friends, family, and foes were dynamic and full of emotion.
Kendare painted such a vivid picture of the god's struggle to survive- by any means. It wasn't pretty, and was at times downright disgusting and horrifying. Watching them as dying humans, still powerful but desperate, deadly, and startling. Full of dark humor, their dialogue was fantastic and often purely entertaining.
Cassandra was a wonderful, reluctant heroine. Full of disbelief and endless strength. With her own desperate need to preserve and protect her loved ones and her world. I loved her brother and best friend, but I fell hard for her boyfriend, Aidan, who had dark, disturbing secrets of his own.


After a somewhat slow start- Kendare had to set her immaculate stage for us- ANTIGODDESS is fast paced, with nonstop twist and turns in a race to outrun death, defeat enemies, and change fate. Who will and who will survive? It's anyone's guess until the very end. I hope we don't have to wait too long a sequel. Even though I was shocked and outraged by some of the events, I'm ready to follow Cassandra into her next battle. I'm certain you will feel the same. ANTIGODDESS is an ABSOLUTE MUST READ.

a Rafflecopter giveaway
Posted by kvsgrimes at 6:00 AM