Hey everyone. Shelley here. Welcome back to the blog. I'm super excited to share with you our stop on the Fear Collector blog tour--- this amazing tale AND a fun interview with it's author, Gregg Olsen.
Now I was introduced to Gregg's writing with his spectacular YA series Empty Coffin, when our friend Jean asked if we'd be interested in participating in the tour for the second book in the series, Betrayal. Learning Gregg was not only a NYTBS author of true crime novels, but also based in my beloved Pacific Northwest, I jumped aboard. But I had to do my homework and catch up by reading Envy, his YA debut. Envy blew me away. I became an instant fan. And Betrayal was just as good.
So here we are today celebrating Gregg's latest adult crime novel. Another first for me and I'll tell you right off the bat it did not disappoint. But before I get ahead of myself, we're going to spend some time getting to know a bit more about Gregg himself.
We threw a few questions out to Gregg and this is what we were able to get out of him...

Tsk Tsk: What do you enjoy most about writing true crime?
Gregg: That’s easy. I love the opportunity to help people share their stories. I know that for most that have been touched by murder or other violent crime, it is the worst possible time of their lives. The pain never goes away. But I do believe that many of the people I talk to benefit from sharing their stories and giving a voice to those who are gone under tragic circumstances. I want to writing a compelling story for my readers, but for those who tell their story to me I want to make sure that I do my very best for their loved ones.
T: How involved, if at all, does your family get with each book?
G: That depends. My wife is my first reader of every book. I’m sure there are parts about that responsibility that she HATES – like the fact that I’m hanging around waiting for her reaction to every page! My girls read my YA and maybe one or two of my adult novels.
T:Do your girls read both your Adult and YA novels? If so, what do they prefer? If not, why?
G: I think they liked Envy and Betrayal the best of my books. But to be completely honest (and that’s what you want, right?), they haven’t read all of my books. Maybe about a third of them at best! There are a lot of reasons for that, but mostly it is because the books that I was writing were not age appropriate for them and I told them they couldn’t read them. Now that they are older, I wish they would start reading them! They have a lot of catching up to do!
T: Knowing that you take your cue from true life events from all across the globe, how much does the Pacific Northwest influence your writing? Your style, process or topics?
G: I love the gloomy beauty of the Pacific Northwest and it’s just as much a character in my books as the people that live on the pages. I love the terrain, the water, the rain, that we don’t really use umbrellas because we are used to getting wet! As far as process goes, I think our dark winters make it easier to write scary things. They also make me more productive. Really, on a sunny day, who wants to write, anyway?
T: You've traveled the world this year promoting your books. What has been the most exciting or interesting place you visited? Did any one place inspire a future project?
G: I’ve found wonderful things, places, people everywhere I went. But I really want to highlight the Philippines. The readers there were so enthusiastic and nice that of all the places that I’ve been, I hope I get to return soon. I loved Hong Kong, too. It might make a good location for a YA thriller…maybe something happens to a kid while on a family vacation there?

Pretty swell guy, huh. It's a well known fact that the Northwest is a haven for the eerie and unseen. We think it's cool, and most of us thrive on the mysterious beauty of our lands. And yeah, you'll most likely see us in hoodies and hats, braving the elements and taking it all in.
So now that you know what sparks and inspires Gregg's creative juices, we'll get to what I thought about the book. 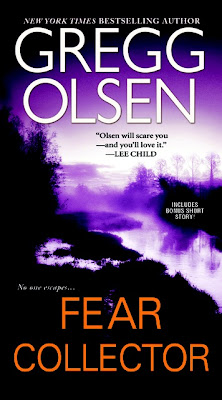 "YOU'LL SLEEP WITH THE LIGHTS ON AFTER READING GREGG OLSEN." --Allison Brennan

Ted Bundy. America's most notorious serial killer. For two women, he is the ultimate obsession. One is a cop whose sister may have been one of Bundy's victims. The other is a deranged groupie who corresponded with Bundy in prison--and raised her son to finish what Bundy started. To charm and seduce innocent girls. To kidnap and brutalize more women than any serial killer in history. And to lure one obsessed cop into a trap as sick and demented as Bundy himself. . .

"GRABS YOU BY THE THROAT." --Kay Hooper 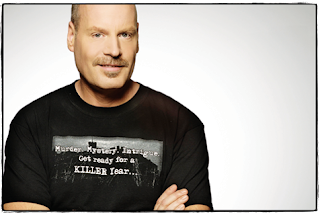 Throughout his career, Gregg Olsen has demonstrated an ability to create a detailed narrative that offers readers fascinating insights into the lives of people caught in extraordinary circumstances.
A New York Times and USA Today bestselling author, Olsen has written eight nonfiction books, eight novels, a novella, and contributed a short story to a collection edited by Lee Child.
The award-winning author has been a guest on dozens of national and local television shows, including educational programs for the History Channel, Learning Channel, and Discovery Channel. He has also appeared on Dateline NBC, William Shatner's Aftermath, Deadly Women on Investigation Discovery, Good Morning America, The Early Show, The Today Show, FOX News, CNN, Anderson Cooper 360, MSNBC, Entertainment Tonight, CBS 48 Hours, Oxygen's Snapped, Court TV's Crier Live, Inside Edition, Extra, Access Hollywood, and A&E's Biography.
In addition to television and radio appearances, he has been featured in Redbook, USA Today, People, Salon magazine, Seattle Times, Los Angeles Times and the New York Post.
The Deep Dark was named Idaho Book of the Year by the ILA and Starvation Heights was honored by Washington's Secretary of State for the book's contribution to Washington state history and culture. His Young Adult novel, Envy, was the official selection of Washington for the National Book Festival.
Olsen, a Seattle native, lives in Olalla, Washington with his wife, twin daughters, three chickens, Milo (an obedience school dropout cocker spaniel) and Suri (a mini dachshund so spoiled she wears a sweater).

There were two reasons I was eager to read Fear Collector. The first was wanting to see how Gregg's writing in an adult novel would differ from his YA. Honestly, not much. His style is smooth like butter. It grabs you immediately. Sucks you in completely and dares you to look away. Like a carefully planned train wreck.
The second was that the story revolved around the notorious serial killer Ted Bundy. I'm dating myself here, but Ted had his reign of terror when I was a young girl. I knew quite a bit about him. Saw his face and those of his victims plastered all over our newspapers and televisions. I was old enough to know this was a man to fear. And I did. But even back then I had a strange need to understand what makes a man like Ted Bundy become such a monster.
Gregg and Fear Collector gave me that opportunity as an adult, a bit more removed from the nightmare and more equipped to deal with the details of the events. That's not to say that it's not as chilling as it was then. Hell, it's downright frightening.
I found myself checking my doors and windows, and hiding under the covers to feel secure. A little "overkill"? Maybe, but that goes to show how intense and real this telling felt.
But this isn't just a true crime story. It's a story of survival, dealing with a past that has too many questions left unanswered. That still haunts you and leaves you broken. We're following the families directly affected by Bundy and seeing how the cycle of abuse and depravity can carry on long after the beast has been put to rest.
Set in the present we have an incredible cast of characters. Detective Grace Alexander, her mother who is convinced Bundy murdered Grace's older sister Tricia, her FBI husband, her partner, and the many people that come into play as victims, suspects and innocent bystanders. No one is unaffected or above suspicion.
I suffered along with Grace and her mother, as well as those struck by the new evil. Grace can't help but see the similarities between current events and Bundy's crimes. The acts are as depraved and senseless but can how could they possibly be related? Is there a copycat on the loose? Are the missing girls and murders even connected to one killer? While a community tries to stop an unknown threat Grace continues to struggle with not knowing what really happened to her sister all those years ago and her mother's obsession with Bundy and inability to move on.
But Sissy O'Hare isn't the only one obsessed with Theodore Bundy and we're privy to the actions and calculations of a killer (or killers) just as wicked and deranged as Bundy himself.
The way Gregg so masterfully spins his tale makes it difficult to separate fact from fiction. It's so compelling and you find yourself wrapped up in these characters lives. You want to seek the truth and find justice just as desperately as they do. You need resolution and closure. And you pray that it comes before anyone else falls prey.
A couple of items that help to make this tale seem more true to life than fiction are quotes from Bundy included throughout the book, and letters created as correspondence between Bundy and key players. Each exchange is twisted, manipulative and unsettling.
Gregg Olsen's writing is truly fantastic. Cunning, suspenseful,  and utterly disturbing, with multiple story lines that continually intersect, Fear Collector is a heart pounding thriller that has you second guessing, shocked and abhorred, all the while glued to the page.

Big thank yous to Jean Vallesteros and Kensington Books for making us part of this exciting tour and granting Shelley this amazing ARC.
Now...on to the giveaway...

a Rafflecopter giveaway
Posted by kvsgrimes at 4:52 PM