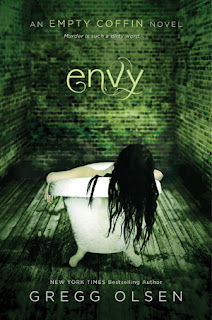 New York Times bestselling adult true crime author Gregg Olsen makes his YA debut with Empty Coffin, a gripping new fiction series for teens based on ripped-from-the-headlines stories…with a paranormal touch.
Crime lives--and dies--in the deceptively picture-perfect town of Port Gamble (aka “Empty Coffin”), Washington. Evil lurks and strange things happen--and 15-year-olds Hayley and Taylor Ryan secretly use their wits and their telepathic “twin-sense” to uncover the truth about the town's victims and culprits.
Envy, the series debut, involves the mysterious death of the twins' old friend, Katelyn. Was it murder? Suicide? An accident? Hayley and Taylor are determined to find out--and as they investigate, they stumble upon a dark truth that is far more disturbing than they ever could have imagined.
Based on the shocking true crime about cyber-bullying, Envy will take you to the edge--and push you right over. 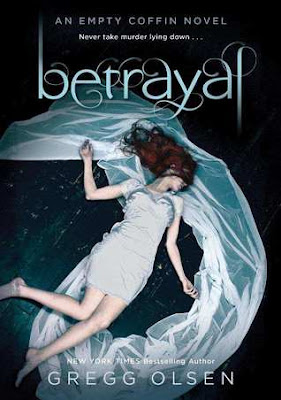 In this action-packed thriller sequel to Envy, foreign exchange student Olivia Grant is stabbed to death after a party--and the prime suspect is her best friend. As twins Hayley and Taylor Ryan get pulled into the aftermath of this Amanda Knox-like crime, they realize nothing is what it seems. Could it be betrayal of the ultimate kind?
Betrayal features real-life crime-solving techniques, heart-stopping suspense, plenty of red herrings, hard-hitting ethical questions, and information about the Amanda Knox case that inspired the novel. As the crime unravels, so does the twins' past…and they must face off against a family member who may unexpectedly have carried out the worst betrayal of all.

Enjoy this excerpt from Betrayal

Annie returned downstairs to find Brianna and Drew on a bench in the foyer. The young couple had found refuge there from the chilly night air and the horde of investigators crawling around the house and yard. The two had expressions that were a mix of worry and fear colored by the greenish cast of a seedling hangover. Drew stood as the police chief came into view. Brianna kept her chin cradled in the palm of her hand. “We found a shattered vase over in the den. Looks expensive. Do you know what happened to it?” Annie asked. Brianna lifted her head and looked at Annie, tracking her with bleary eyes. “Yeah, one of those bonehead kids crashed into it at the party. It was my stepmom’s fave too,” she said. “All right, an accident, then . . .” Annie said. “Were there any other accidents or fights I should know about?” “Don’t think so,” Brianna replied. No drama at a teen kegger? Not likely, Annie thought but said, “Well, we’re just about done up there. Now I need you to tell me exactly what happened. Tell me how you found Olivia. Be as descriptive as possible. If you’re up to it, it would be even better if you showed me.” “Showed you?” Brianna asked. Annie nodded. “It would be extremely helpful in our investigation.” “Like . . . acting out what happened?” “Not really acting it out, but pointing out where you were standing, how you found her, what you did."
The three of them headed to the staircase just as Birdy’s team made its way down. As the teens hung back, Olivia’s shrouded body was rolled onto a folding gurney at the top of the stairs. Bonner and another deputy carried her down the steps. “Bye, Olivia,” Brianna said and then skipped up the stairs, two at a time. Moonlight poured all over the floor and onto Brianna Connors’s bed. The bare branches of the maple outside the window made a spiderweb pattern on the mattress. Her Felix the Cat wall clock indicated it was after four in the morning. The police chief studied the teenager. Like many girls with divorced parents, Brianna had learned how to command attention in any circumstance. With Drew hanging in the background, Brianna put her hand on her hip and surveyed her bedroom from the doorway. Her eyes landed on the bloody spot on the floor where Olivia had bled out. “You guys are going to clean up this mess, aren’t you?” she asked. Annie shook her head. “Sorry. We don’t offer that service.” “Don’t you have a housekeeper?” Drew asked Brianna. “Yeah, but she only comes three times a week. And she won’t be here tomorrow. She said her mom or someone in her family is sick. I doubt it, though. She’s a little liar.” “Brianna,” Annie started to explain, “this is a crime scene. You won’t be able to have your room back until we’ve done all of our work here.” Brianna made a face. “Oh, crap,” she said, pulling the robe tighter around her thin frame. “That’s just perfect. What am I supposed to do? This isn’t fair. This is my room. Can I at least get some jeans and a new top?” Annie nodded at the deputy. “These okay?” he asked, grabbing a white sweater and a pair of brown-dyed Mek jeans from underneath a white ghost costume strewn over a chair on the other side of the room.  “Not those! I wore those yesterday." 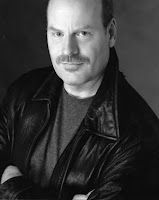 A Seattle native who lives in Washington State, Gregg has seen the darker side of the Pacific Northwest and knows a little more about the area than your average guy. “There is something dark and beautiful about the Pacific Northwest," he says. “We seem to have an overabundance of serial killers out here–so many, in fact, sometimes I wonder if they have a secret convention in Washington.”
A New York Times and USA Today bestselling author with 13 books and sales of over one-million copies to his credit, Gregg made his young-adult fiction debut with Envy. The follow-up, Betrayal, will be published in September 2012.

On to Shelley's Review of Betrayal:
Our blog ended up on the Betrayal blog tour because of the wonderful Jean Vallesteros of Jean BookNerd. So first, let me thank Jean, GREGG and Sterling for this amazing opportunity.
I hadn't read any of Gregg's true crime novels. Typically they aren't my type of read. Throw in a paranormal twist and it's a whole new ballgame. And the fact that this is a YA series and that Gregg is also from the Pacific Northwest, well, I couldn't say no. In fact, I jumped at the chance.
Like I said though, I hadn't read any of Gregg's books, including the first of The Empty Coffin series; Envy. So I set off on my mission to catch up in order to get to the book I HAD to review. Mind you, I didn't own Envy and had to buy a copy...of course I bought the paperback. The cover was too cool and creepy.
Well, I sailed through Envy. Not to hurry and finish so I could get to my required reading, but because I absolutely LOVED it! I absorbed every word. And when it ended...I couldn't wait to go right to Betrayal, with it's gorgeously creepy cover.
The storylines are completely different as they both focus on separate true crimes. What I couldn't wait for was more of the twins; Haley and Taylor. They are the most amazing characters. Odd, quirky...these two are anything but ordinary teens. And the gift they share is beyond cool.
So we move on from Katelyn's death, six months later. The town has barely recovered. And everyone but Katelyn's parents are ready to get back to "normal". If you've been paying attention...nothing is normal about Port Gamble and it's residents.
It's a town full of bad memories, regret, fear and many, many secrets.
While the girls discovered and revealed a few of those secrets in Envy, they had no idea what more they would uncover about the people they grew up with, and thought they knew. What they would discover about the crash on the bridge 10 years earlier. Or what they would learn about their mother's secrets and themselves.
While the focus of the story is Olivia's death and finding her murderer, so much happens to Hay-Tay that they find themselves on a wild goose chase to find out the truth about what really happened on that bridge and why they are they way they are.
They aren't the only ones caught up in the chase and some of their investigating results in...well, I can't tell you any of that. Let me just say, some of it will surprise and shock you. And the way the girl's closest allies come to their aid is stunning.
Meanwhile, Chief Annie and her crew are trying to find Olivia's killer and no one is being too cooperative. The girls and their friends are all suspects and as more evidence is uncovered, the facts get more twisted and bizarre.
This story may be based on the Amanda Knox case, but Gregg makes it all his own. He continues to keep you enthralled with his colorful dialogue, his beautiful and chilling descriptives and his knack for bringing out the absolute worst in his characters.
We thought Starla and her family were, uh, effed up. Well, they've got nothing on Brianna and Drew's. Even Olivia's grieving parents show us such a dark side of human behavior, it's like watching a train wreck. You simply can't pull yourself away. And yes, there's more from Starla and Mindy. Mindy will again blow you away with her unbelievable behavior.
I guarantee you won't know who done it until the very end. And if you think you've figured  it out...the why of it will not be what you were thinking.
While Envy is still my favorite of the two, I was glued to every word on every page. There were so many twists and turns, I constantly changed my guesses where the murder case was concerned and as to what exactly the twins would find out about themselves and their past.
I was so completely immersed in this tale. Completely. That this wasn't hardcore paranormal or romance and still kept me that captivated, is a true credit to Gregg's ability to weave a perfect, magical web. The ending couldn't have been better. In fact, it was magnificent. And left me wanting to see just what he's got hiding up his tricky, tricky sleeve. Guilty cannot come soon enough. Kudos to Gregg for making me a true fan.
And oh yeah....NORTHWEST Authors ROCK the MOST!!!

Thanks for joining us and don't forget to enter in the GIVEAWAY below...
To see who is coming up next on the tour head over to Jean Book Nerd for those details.

a Rafflecopter giveaway
Posted by kvsgrimes at 11:35 AM

Email ThisBlogThis!Share to TwitterShare to FacebookShare to Pinterest
Labels: Blog Hop, Reviews, YA