BLOG TOUR: How I Lost You by Janet Gurtler

We are so excited to bring you our stop on the How I Lost You Blog Tour. We have a GREAT guest post by Janet that we know you'll dig. Janet is well known for her YA realistic fiction, and we wondered what she read as a young teen and what influenced her choice to become a writer. We loved learning a bit more about her ourselves--- and we are anxious to get a chance to read her latest book. Best friends? An unbreakable bond? A bump in the road? Well, we must know what that bump is, and of course what happens after. We're more than curious--- aren't you?
We want to thank Jean, BookNerd and Janet Gurtler for having us on this tour. As always, we thank you as well.  Enjoy the spotlight and don't forget to enter the AWESOME BookNerd GIVEAWAY...

What fiction most influenced your childhood, and what effect did those stories have on How I Lost You?
Fiction was a big part of my childhood. One of my favorite elementary school memories is ordering books from a book club (similar to the Scholastic Book Order Forms from today). In a family with four kids it was a treat to get new books of my very own. I remember how excited I was when they arrived. I even remember picking them up and smelling them. Somehow, in my mind, they even seemed warm, like fresh baked bread from the oven.In my earlier years I would read whatever I could get my hands on, but the first author I remember falling deeply in love with was Judy Blume. It was astounding to me that characters in books actually thought like me and worried about the same things I did. When Margaret, in Are You There God, It’s Me, Margaret wondered if she were normal and thought about bras and periods, I felt such an enormous kinship and gratitude. Maybe I wasn’t so abnormal after all!I gobbled up everything by Judy Blume and then the next author I remember impacting me the same way came a little later in my development with S.E. Hinton. Again, these were gritty stories that I could relate to my own life.I think, or rather I hope, that both these authors had a positive influence on what I write today. I am drawn to writing realistic fiction and I true to be honest and also look at the lighter side of emotional situations. I try to write books people can really relate to as I did with authors I read. I try to write about characters are flawed and like many of us are works in progress, far from perfect. In, How I Lost You, the best friend relationship is powerful and layered, but it also has the potential to cause heartbreak as painful if not more painful than romantic heartbreak. I hope readers will think about the choices the girls make in this book, and relate it to things in their own lives or ponder how they might have dealt with the situation if they were in the characters shoes. My hope is that a reader somewhere will understand a part of herself a little better because of the experience of my characters. 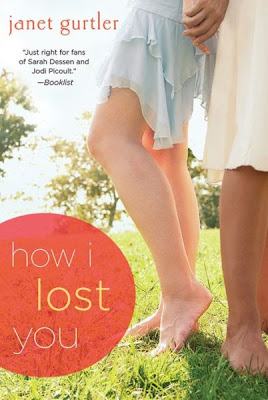 There are a few things Grace Anderson knows for sure. One is that nothing will ever come between her and her best friend, Kya Kessler. They have a pact. Buds Before Studs. Sisters Before Misters. But in the summer before senior year, life throws out challenges they never expected. And suddenly the person who's always been there starts to need the favor returned. Grace and Kya are forced to question how much a best friend can forgive. And the answer is not what they expected. 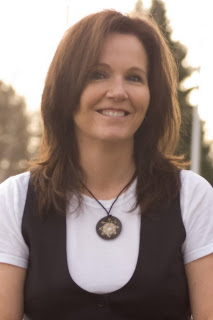 Janet lives near the Canadian Rockies with her husband and son and a little dog named Bruce. She does not live in an Igloo or play hockey, but she does love maple syrup and says “eh” a lot.
Janet only gives 5 stars to the books she reviews because she is an author herself and knows that no book can appeal to everyone, but like a child, it is very special to the creator.
I'M NOT HER was published by Sourcebooks Teen Fire in May 2011.
IF I TELL released Oct 1, 2011 from Sourcebooks Teen Fire.
WHO I KISSED Sourcebooks Fire 2012.
Janet's work will also appear in the THE FIRST TIME anthology, DEAR TEEN ME anthology and WHO DONE IT anthology.